A moving and inspiring story of redemption and personal triumph in the face of great odds, Jet Li's Fearless is the based-on-facts story of Chinese folk hero Huo Yuanjia (Jet Li). The son of a martial-arts master whose greatest strength was his restraint, Huo grows into an unbeatable fighter whose pride and thoughtlessness lead to a chain of tragic losses.

After a classic wanderer-in-the-wilderness penance, Huo reinvents himself as a mature instructor of Wushu, a martial arts system that embraces all forms of fighting without preference or pre-judgement. He also becomes a populist symbol, at the dawn of the 20th century, of China's refusal to entirely capitulate to the boot of Western colonialists. Taking on whatever European, American, or Japanese fighter the outsiders bring in to demoralize the natives, Huo becomes a legend that, in real life, is still revered.

Thrillingly directed by Ronny Yu (Warriors of Virtue), Jet Li’s Fearless is a dazzling action movie that transcends its breathless fight sequences with Huo's sportsmanship virtues, i.e., knowing when you've won by example, rather than by the fist. Jet Li is superb in the role.

News
Martial Arts
Hey everyone I am sorry I haven't been blogging lately, I have been super busy sorting things out for my future plans, I have some exciting news that I would like to share. Number one I will be in Auc...
Read More 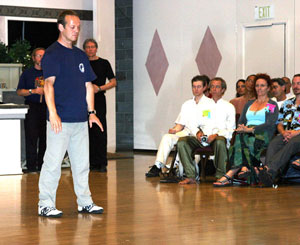 Using Taiji and Qigong as a Tool for Inner Peace
Internal Arts
by Ronnie Robinson Having taught taiji and qigong for over 20 years, the last 10 of which have been as a professional instructor, I have worked with a wide range of people from many social backgrounds...
Read More
Fun
Martial Arts
October 2nd, 2010 by heretic Haven’t trained all week, at all, can’t count Intuflow in the shower lolol. I’ve had a cold and the end of the quarter is frenetic at my work – man...
Read More