The urge to fight

Almost every (male) martial arts practitioner I've spoken to has described the same thing to me - that being during their early years they actually felt more inclined to start a random fight than before when they had no training, but this feeling dissipated over time.

This is probably why it's drilled into us to show both humility and confidence in equal measures (and avoid conflict where possible). I suspect that these warnings are so hammered home because if they weren't male colour belts would be far more likely to have a nasty experience.

My thoughts on this are as follows: People want to fight because they don't know what the outcome is, or it's in doubt. No one has the urge to fight a child or a ninety year old. This is because you know what the outcome will be. But you see some obnoxious drunk in a bar and you think ‘I probably could'..... but you don't know for sure, so you have the urge to find out.

I expect that when you progress to the higher ranks and you gain more and more confidence you also gain more and more patience with these situations because at some point fighting that 120kg fat drunk (strong and violent though he is), isn't a challenge. It'd be just like fighting a child; you know what the outcome is so there's no point to the exercise.

Anything else new with me? Well I discovered that I despite windows vista.

Oh and here's a cool sequence from my parents cat preemptively defending itself against the vicious Christmas tree.

It rather reminds me of the old fashioned 'Welsh' self defense philosophy which is to neutralise your enemy before he becomes aware of your existance. 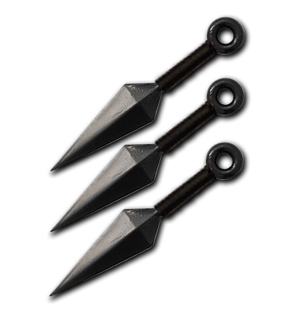 Throwing knives
Weapons
Almost from the very beginning of Egyptian history, daggers were adorned as ceremonial objects with golden hilts and later even more ornate and varied construction. Until recently military officers wo...
Read More