Kumdo is a modern martial art of fencing, the Korean equivalent of Japanese kendo. The name means "the way of the sword," and is a cognate with the Japanese term.

The use of swordsmanship on the battlefield in Korea dates as early as the Three Kingdoms period, where sword techniques using a two-handed sword are illustrated in a book named Bonguk Geombeop, believed to have been authored during the Silla dynasty.

According to the Army Account of Military Arts and Science, a Ming dynasty strategy book written in 1629 by Mao Yuanyi, Korean fencing was a martial art that had reached Korea through Chinese martial artists. Much of this text was based on earlier works by Ming general Qi Jiguang, who successfully adapted and emulated the use of the Japanese katana by developing the wodao, to respond to the prevalent threat of the Japanese wokou or pirates.

Later in Korea, warriors were regarded as inferior to scholars during parts of the Goryeo Dynasty (908-1392) and much of the Joseon Dynasty, due to the heavy influence of neo-Confucianism, which greatly valued scholastic achievement and refinement over martial prowess. Yangban, Joseon-era noblemen who were typically the only males eligible for government positions through the Chinese-based examination systems, generally preferred to apply for the civil service as opposed to the military as the civil service was considered more prestigious and a better guarantor of wealth and honor compared to comparable positions in the military's officer corps, which were also generally restricted to yangban and chungin. In addition, the royal court, mindful that the Joseon dynasty founder, Yi Seonggye, was a general who overthrew the last Goryeo king, looked warily at its successful and popular military leaders and were reluctant to support a large military. Influenced by Confucian thought, the royal court generally deferred to imperial China out of respect in regards to their foreign, cultural, and defense policies, relying on the Ming and Qing dynasties for military aid and necessary foreign intervention.

This is in contrast to their Japanese counterparts, who valued martial prowess and leadership because of centuries of continuous warfare between warlords or daimyo who fought over territory and hegemony, despite acknowledging a figurehead emperor and noble court based in Kyoto. Military life during this period allowed Japanese peasants a means of social mobility they otherwise would not have, as they could aspire to be elevated to samurai class and status before the Edo period. Toyotomi Hideyoshi, born a peasant, was even able to become the ruler of Japan.

While swordsmanship continued to be practiced, it was eclipsed in popularity by archery and the use of cavalry, was generally not as systematised as Japanese sword schools, and was seldom practiced beyond members of the military and their associates.

The Muye Dobo Tongji, compiled during the reign of King Jeongjo in the 1790s, cataloged various sword arts and applications known to Koreans during that time, as well as hand-to-hand techniques and the use of other weapons. While noting the efficacy of the Japanese katana and its applications, the manual noted that Chinese influences on Korean swordsmanship and other martial arts were more prevalent.

These ancient arts are not popularly considered to be ancestors of kumdo, though some kumdo scholars, including those at the Korea Kumdo Association, believe ancient Korean fencing as outlined in a Silla dynasty book known as Bonguk Geombeop (Korean Sword Method) was the basis of all modern two-handed sword techniques. This belief is not commonly held outside Korea.

Other scholars regard it as being a Korean version of Japanese Kendo, with almost all kata, techniques, rules and regulations identical between the two

Kendo, then still known as gekiken, was introduced to Korea from Japan in 1896 as a form of police and military training. After Japan outlawed all Korean martial arts, they introduced Japanese martial arts such as judo and kendo to schools. Its popularity in Korea spread quickly as part of Korea's first national physical education system. Up until end of the occupation in 1945, kumdo developed in parallel with kendo.

After the occupation ended, kumdo restructured itself, and the Korea Kumdo Association was formed in 1947. When the Korean National Sports Festival was reinstituted in South Korea in 1956, Kumdo was included as an official event.

Consequently, the history of kumdo in Korea can be seen in the following timeline, split in 2 periods; prior to Japanese invasion and after WWII. Joseon refers to Korea during the Yi Dynasty: 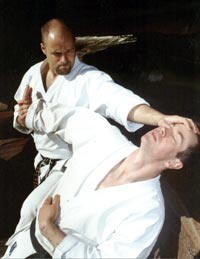 No First Attack in Karate
Kumite and Sparring
By Iain Abernethy In recent years there has been much debate as to the legitimacy of pre-emptive striking. Some support the method stating that action is always faster than reaction, and emphasise the...
Read More
Lies
Martial Arts
I was away working on a New Zealand Ministry of Health project. I had checked into World Wide Backpackers hostel on the Terrace, in the heart of Wellington, for 2 weeks. On the weekend of the rugby 7’...
Read More

Yield Theory: Proflect to Flow
Mind and Body
Mind
86,400. This is the number of seconds in a single day of your life. There are only two choices you can make within every second: make progress or make excuses. Having studied Neuro-linguistic Pro...
Read More