The Yari has a shorter shaft then the naginata and a blade about 20cm long with two cutting edges, allowing a two way attack (cutting tendons, knees etc).

Also called a Yari is a spear about 3.6m long and seldom used because of its awkward handling.  Another spear was made of a long pole with a cruciform at the end made of two cutting blades fixed perpendicular to the handle. The point of the weapon used in training is made of wood protected by a leather ball and two round wooden bars take the place of the blades.

The naginata is a weapon made from 1.8m to 2.8m of hard wood, at the end of which is a blade about 30cm long and as sharp as a sword. In some cases, the blade could be from 60cm to over 90cm long.
The naginata is derived from the ‘kwanto’ or Chinese bronze halberds imported very early on. In the Nara period, it was difficult to combat armed warriors - an increasingly important fighting force - with classical weapons such as arrows or swords. The length of the naginata, however enabled foot soldiers to hamstring the horses and keep the knights at bay.

In the famous battle of the Taira versus the Minamoto at Dan-No-Ura in 1185 the naginata played an important role. From that time on, its  use on battle fields became widespread and many samurai lost their legs.

The Beauty of the Sword

The beauty of a katana is  the result of four qualities; its shape, the lie of the grain on the blade, the undulating pattern on the cutting edge and the minute dots which make up the design along the edge.

The oldest swords are also the most in demand. Until the 16th century steel was made from iron melted down with charcoal and worked into cavities made on the side of the blade exposed to the beating. The steel with a low carbon content stayed exceptionally supple. After the 16th century the use of bellows which raised the temperature of the ovens produced an alloy with a higher carbon content.

The metal obtained is then hammered until a thin sheet of steel is obtained. After being hammered and worked day after day, this sheet of steel is used to cover the body of the sword made of a softer metal. The combination of the hard and soft metals gives the blade its flexibility and its strength.

Once the sword has taken on its shape the process of re tempering begins. A clay-based compound is applied thinly to the cutting edge and generously to the rest of the sword. The undulating pattern on the cutting edge depends on the way in which this mixture is applied. For the most part this process is a professional secret and often enables one to recognise the craftsmans skill. The difference in thickness of the clay between the cutting edge and the rib gives a blade with varying grain the more tempered part being called the nie and the rib nioi. Nie suggests spirit, a virile nature, nioi signifies dignity and nobility. The synthesis between the nie and the nioi is an important criterion in evaluating a katana.

Providence
Life
“It is not because things are difficult that we dare not. It is because we do not dare that they are difficult.” – Seneca
Read More

Huzur Vadisi
Retreats
Yoga and Activity Holidaysbased: Turkey Huzur Vadisi has been running since 1993 as a venue for Yoga inspired, relaxing holidays in the stunning surroundings of the pine forested mountains of Turkey’s...
Read More 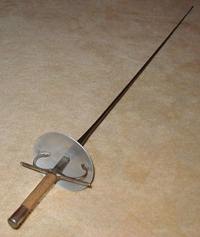 Fencing Weapons
Weapons
FoilThere are two varieties of foil in use today: the "dry", or nonelectric, foil; and the electrically scored foil. The components common to both varieties are the pommel, grip, guard, thumb pad, and...
Read More