A complete guide to martial arts philosophy for seld-defence

Martial arts training for self-defence involve activities that improve strength, hand-body coordination, flexibility, speed and cardiovascular health. Martial art is a system of combat movements that include combative skills such as kicking, punching and blocking. Its philosophy emphasises self-control and discipline. In an increasingly g...

Tsutomu Yamamoto, the head teacher of the Kenshinkan Dojo

The broad connotations and various possible interpretations of the moral culture are often very difficult for the western mind to grasp because this is an aspect of Oriental Philosophy which pervades the lives of Oriental people. In a word, it is the endeavour and process of becoming an exemplary person such as Confucius (552-479 BC).

I state in ‘Practical Applications for the Kata Jion’ that Kata was originally intended to capture the ‘highlights’ of an effective combative system. The distillate of this system survived over generations as it had an inherent aid memoir that enabled the practitioner to communicate it to his incumbent generation. As a result of the balance needed between reliance on memory and the need to maintain the principles of Kata, an optimal and not a limitless number of movements exist. 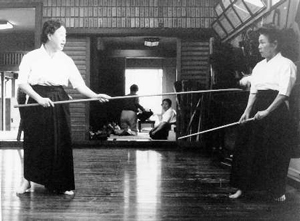 Naginata
Styles
Is a Japanese martial art form for men, women, and children. The Naginata originated over 1,000 years ago. The Naginata is a weapon with a rich history, utilized and refined from the Nara Period (710-...
Read More
Key Points on Demonstrating Kata
Kata and Forms
The following are some key principles to strive for when performing kata, whether in class or in front of a large audience.  There are certainly more aspects to consider, but keeping these in min...
Read More
Etiquette
Martial Arts
One of my students asked me about respect and whether he should refer to me as sir. I am not particularly touchy how a student addresses me. I have been called sabonim, sir, instructor, Dave; to me it...
Read More