The name Trayvon echoes around social networking, the world’s media and on the streets of New Zealand. As a martial artist and former bouncer I think is a sad state of affairs when a 28-year-old security guard is unable to whoop a 15-year-old youth, unable to take a beating and has to rely on a firearm for protection from an unarmed youth. What is even sadder is that a hoodie-wearing African youth buying a can of pop and a bag of skittles instantly comes under scrutiny. This can only be attributed to the aberrant conditioning of a kooky and gung-ho community of a fenced off Florida enclave. To me, it looks like the first step down a slippery slope of white only areas and locally sanctioned apartheid.

At times like this, I am grateful that our good friend, the USA, has an African American president. Our perception of African and an indigenous people through no fault of our own as Europeans is conditioned to some extent with outdated knowledge of colonial times. I see historical articles online of Nazi doctors in Namibia examining African tribes to bring their “science” to human matters. However, Nazi science could never replace trained sensibility and human insight. No matter how proud of my ethnicity I have never been able to fully incorporate the fortress of high mindedness of the Third Reich and the Afrikaner governments. I have always believed that physical mastery and education are the great engines of personal development and emancipation.

Looking at the eclectic mix of students in front of me I see Maori, Pacific Islanders, Europeans, Africans and Asians all who see themselves simply as New Zealanders. Maybe because I am a martial artist I have always been attracted by the idea of equality and fair play. The roots of many martial arts are examples of human virtue under adversity. Taekwondo is a fighting art which in the past had been driven underground by the culture and martial arts of colonial Japan. Krav Maga is the self-defence method used by an ethnic group deemed parasites by Hitler. It is not so much the violence of martial arts but the science and wisdom that captivates me. Apart from belt ranking the training hall it is a totally egalitarian environment; where age, wealth and colour have no relevance.

Looking at the state of the world I have an attitude of gratitude that I live in New Zealand. The country has intrinsic problems with the employment relations system, which is out of touch with reality particularly when compared to other industrialized nations. Our police and legal system has a lot to be desired. However, I do see a nation where many different people all come together. There are no id cards, no black/white neighbourhoods; no unfortunate immigration bogeymen whether North African, Turk, Pakistani, East European, Arab or Afghan like in Britain and Europe. Black and white, Jew and gentile we all call this land of green pastures our homeland.

Humiliation is not Self-Improvement
Martial Arts
By Rob Redmond - February 28, 2009 / http://www.24fightingchickens.comBeing humiliated does not improve you as a person. The experience of humiliation is negative, and while it may serve to provide mo...
Read More
Back in action
Martial Arts
Hello people of the martial world  I am back in the land of the net and ready to blog . At this point in time I am preparing to leave for the India where I will be training in the oldest style of...
Read More 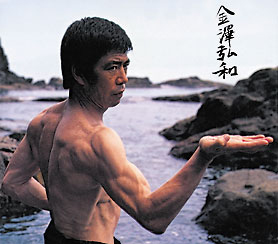 Hirokazu Kanazawa
Legends
Born 1931 in Japan (10th Dan) One of the world’s most renowned and respected traditional karate masters alive, Kanazawa Shihan is the only karateka ever to have won the notorious ‘All Japan Karate Cha...
Read More