I have always found it amusing how many Polynesians would walk around Rotorua wearing a shirt that is unbuttoned at the bottom. Like Mexicans in East L.A so they could quickly draw a handgun without ripping the shirt open. It is unlikely that these ‘Mexicans’ have ever fired a handgun and most definitely never experienced US style racial profiling where you could get stopped and searched for a concealed weapon simply for looking like a Hispanic gang member. I find myself laughing when I recall how quickly the officer patting me down left once he discovered he was dealing with a foreign national.

People get a little tense; they get a headache and generally they do not want to think about all the problems and violence of the Middle East. However I credit Israel with the practical common sense approach that I teach. Probably the most important distinction is to survey the street and take a mental picture of the “battlefield”. The area of poor lighting, the rubbish skip, the dark shadows could all house a street predator; a group of young men milling under a street light or a vehicle that is moving too slowly. All these things should signal some form of threat. Unfortunately many victims of street crime often are blindly unaware of the danger that they are moving into.

In security we use a colour code of awareness where code white is a state of being switched off; like you were strolling to a comfy sofa in your own living room. Code yellow is a state of threat awareness where you are switched on and have a good peripheral awareness of the environmental danger spots. Code orange is the state of threat evaluation and represents a rising threat of attack. Code red is the fight or flight state where utilize our hand to hand skills or evacuate. Of course the colour code system works on the premise that you are in code yellow to begin with as you cannot evaluate a threat that you are oblivious to and the first that you know of a situation is when it is too late. Out on the street always adopt code yellow.

To summarize this week’s blog I would like to make the following distinctions. When out and about in bad weather never let your guard down; some street predators favour bad weather for their bidding. Project positive body language and look formidable; need I say more to explain the benefits? The primitive language of the jungle is alive in the urban jungle of today in the way we use body language. Never lower your eyes or look away, not only are you taking your eyes off the threat but it denotes submission which could invite an attack. Speak in a firm, clear and confident manner. When attacked or threatened react explosively and use the element of surprise to do the unexpected; something the Israelis call "chutzpah". Working security we almost always work with a backup partner to watch our back when dealing with an incident; someone to keep an eye on everything and everyone around. This strategy could serve you well on the street. 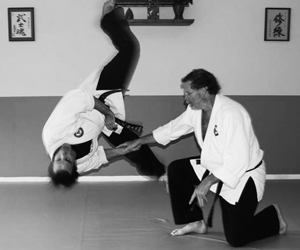 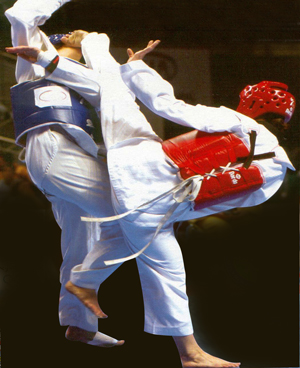 Taekwon-Do Basic Sparring Strategy
Kumite and Sparring
There is a strategic science to sparring. From the outside, sparring looks like random kicks and punches thrown mercilessly with the objective being to injure. From the inside, however, a sparring mat...
Read More