Korean terminology flows naturally off my tongue after hearing the same words for years from a Korean master. My school’s Taekwondo programme is pretty much based on that of my master. A lot of care went into breaking the art down into easy to learn hand-techniques, one-step sparring, basic forms and kicking exercises making it a winning school formula. From the syllabus down to the design of our school brochures I have used much of my master’s style and methods in running my school.

I was my master’s first black belt and under him learned the skills of an instructor. At first running the warm-ups then helping with the white belts, and then the kids to eventually becoming the main instructor at the dojang; often running the school in the master’s absence. The master explained to me that teaching martial arts was more than just demonstrating some techniques and yelling commands; it was about touching people’s hearts in a positive way. He was a man who had committed most of his life to the martial arts; a man with profound knowledge of the sport, the culture and the spirituality of Taekwondo.

The energy, spirit and wisdom seemed to just bubble out of the tough Korean with the broad smile and friendly demeanour; transcending all language, cultural and ethnic barriers. Seeing North Europeans, Latinos, Asians, African Americans and Hawaiians punching and kicking in unison under the same roof; it was ironic how a fighting art can bring unity amongst diverse groups of people. Our school was a school whose doors were always open to visitor; where people would stroll in off the street and end up enrolling in classes.

Often I would open up the school in the morning and operate the business gaining valuable insight into running a martial arts school in a country and culture which coined the term McDojo; where every suburban mall seemed to have a martial arts studio. I acquired valuable people skills, insight and sensitivity which have led to the success of my emerging school here in New Zealand. Using the same formula to captivate and excite the children who walk through the doors of my school I have seen my classes grow every week from the time when I started with just one student in April.

Taekwondo has brought about a refreshing change to Krav Maga, where I teach adults methods designed to eliminate a threat in the most effective manner possible. Sometimes I wish that people did not even know that I teach such methods. However I always keep my classes lively and fun with aggression drills and plenty of pad work; emphasising the fundamentals as well as brand new techniques sent to me weekly from Israel. I pride myself as an honest reality based instructor and can say with all certainty that no-one will earn certification from me without understanding the fundamentals. It is the fundamentals that serve us when the push comes to shove in a live situation.

Running Taekwondo though puts the laughter and fun into the martial arts; seeing kids bouncing off the walls, jumping about, trying all kinds of kicks, often falling on their butt, getting up and having another go. I think martial arts are really for the kids and the kids at heart; to provide an exciting activity that encourages challenge, pride and confidence and sets a precedence of success. I was not born with the knowledge of martial arts, none of us are, however I bet there are instructors who act that way. I have been exactly where my students are and I know that success comes through perseverance and breaking everything into simple steps and concepts. To keep building and growing; that can be a challenge. For those who want the ultimate formula I have the Indomitable Combat Success Programme which gives my students the opportunity to train with me in both Krav Maga and Taekwondo.

Life and times of a wondering Martial artist 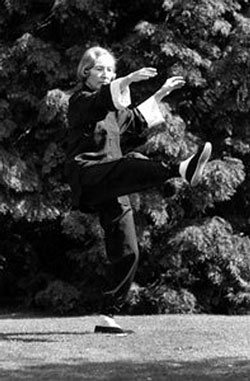 An interview with Gerda Geddes
Interviews
Interview by Ronnie RobinsonGerda Geddes was the first person who ever studied and taught Tai Chi in the UK, she began training in Shanghai at a time when very few women of any nationality were able t...
Read More
Fun
Martial Arts
October 2nd, 2010 by hereticHaven’t trained all week, at all, can’t count Intuflow in the shower lolol. I’ve had a cold and the end of the quarter is frenetic at my work – many...
Read More

Hapkido
Styles
Hapkido is a dynamic and eclectic Korean martial art. It is a form of self-defense that employs joint locks, pressure points, throws, kicks, and other strikes. Hapkido practitioners train to counter t...
Read More

Soldiers are as strong as the general who leads them, and, in a like manner, students can only excel under an excellent instructor. We cannot expect a bamboo to grow in a field of reeds, nor can we expect to find an outstanding pupil under an unqualified teacher.

It is of particular importance that the two aspects of TaeKwon-Do, the spirit and the technique, must be taught together. Therefore, a qualified instructor must combine the qualities of a scholar and a soldier if he is to produce pupils of noble character and outstanding skills.

Such an instructor must possess the following qualities:

One who gains confidence from his seniors is trusted by his fellow instructors, and is respected by his juniors.